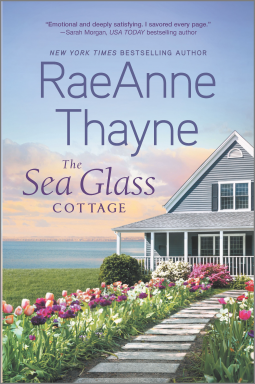 Olivia daughter of Juliet, is called home when Juliet falls and breaks a hip. They have already known hard challenging times as Olivia’s dad was killed in the line of duty in a fire. Her sister Natalie died of an overdose. When Juliet had so much to deal with Olivia took back stage and so there is a sticky mother-daughter relationship. Plus Olivia with some good reason has fears that are holding her back on making new choices around her work.

Juliet has parented Natalie’s daughter Caitlin, continued on with a very successful garden center and has another secret she isn’t letting on about to her daughter and grand daughter. Her neighbor Henry is a great friend and there might be something more there but Juliet is not going to allow it if at all possible.

Caitlin has found her mother’s and Olivia’s diaries and read them avidly because she wants to find out who her father could be.  Since reading the diaries she has been surly with Olivia because Olivia expressed some strong feelings as twelve or thirteen year old might.

Connor has returned to town as fire chief because his sister Mel and her three boys need a bit of support after a no good husband and father abandoned them. He and Mel have always been connected to the Harper family growing up and Mel is Olivia’s best friend.

So… there is plenty of things going on and the stories of each carry the plot along in a seamless way. And eventually everyone finds what they seek and new paths are chosen. I enjoyed the story and once everyone really communicated, difficulties were resolved.

A warm satisfying read with flawed but very well intentioned and loving characters who all deserved their positive ways forward.

RaeAnne Thayne
New York Times bestselling author RaeAnne Thayne finds inspiration in the beautiful northern
Utah mountains where she lives with her family. Her books have won numerous honors,
including six RITA Award nominations from Romance Writers of America and Career Achievement and Romance Pioneer awards from RT Book Reviews. She loves to hear from readers and can be reached through her website.

Reread. Listening to it this time.