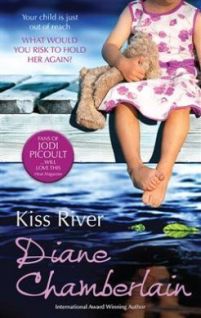 Your future is within your grasp. How far are you willing to go? Your adopted child is in an orphanage. Only you can save her. But you need money, a lot of money, money you just don’t have.

Gina Higgins is on a desperate journey across the country. To save her daughter, she must find the Kiss River lighthouse that holds the answers she so urgently needs. But the lighthouse has been destroyed and now her only hope is to uncover the secrets hidden within an old diary, a Second World War love story that has the power to change her life forever …

Kiss River follows on from The Keeper of the Light.  This book introduces a new character – Gina – a teacher from Washington state.  She has travelled right across the country to the east coast.  Gina is looking for money – but finds in the end something far more valuable.
On her first night she meets Clay O’Neill who invites her to the Lightkeeper’s House that he and his sister Lacey are living in while they do it up.  We met Clay and Lacey in the previous book, they were the son and daughter of one of the main characters, being only teenagers when their mother died. They know a partial truth about their mother, but not the whole truth.  It was interesting to see that Lacey has taken on all the characteristics of her mother – good and not so good.
Gina wants to recover the lighthouse lantern that has been blown into the sea many years ago during a storm.  Alec – Clay’s dad is still against the idea of seeking it out and raising it up from the seabed and while he discourages it nobody in the town is going to help Gina.  Gina has a special reason for wanting to raise the lantern, one she is not sharing to begin with.  When she does Clay feels she has been dishonest from the beginning.  They have begun to build a relationship that will be life giving for both of them – if it can work out.
Alongside the story in the present there is one that travels along in 1942.  Gina has a diary with her that tells of Bess (who was mentioned in the previous book – but was off stage!) the story of a young girl caught up in the war and a relationship.  Gradually how that unfolds and its relevance to the present becomes clear.
I was not quite so gripped by this story as in the previous book, however I was still engaged enough to want to find out how characters were linked and where the story would end.  I certainly want to read the next one to see how Lacey fares.  And no doubt there may be a little more about Gina and Clay and how their story is developing.

Keeper of the Light
Kiss River
Her Mother’s Shadow